When my mother, Shirley, died aged 86, we knew that she had kept a detailed page-a-day diary from the age of 16 until the day before her last journey to hospital. What we didn’t know, until we started clearing her flat in north London, was that she had carefully and meticulously kept and archived all the important (and many not so important) documents and records of her life and the times in which she lived: letters, postcards, photos, journals, newspaper articles, travel guides, maps, etc.

As well as that, she had regularly, particularly towards the end of her life, revisited her diaries, adding what she called her “rememberings” of people, places and events, such as growing up in Deptford near the London docks, the blitz, and being evacuated to a farm in Devon.

During and after the second world war, she worked in the British film industry, first as a secretary, then in continuity. In her letters, journals and diaries she wrote detailed, acerbic and often very funny descriptions and reflections on the various goings on. 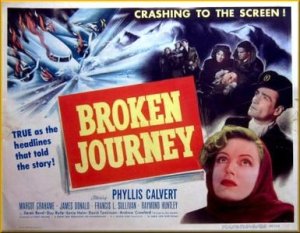 The photograph is one of several we have of the various productions she worked on, along with her production diaries and notes. This one is of the whole crew and the actor Phyllis Calvert (with the scarf) who made Broken Journey – a film about survivors of an air crash in the Alps – shot at Pinewood studios and on location in the French Alps by Gainsborough Pictures in 1948. It was directed by Ken Annakin (who later directed Those Magnificent Men In Their Flying Machines).

My mother is right in the centre, as she was throughout her life.

(This first appeared in The Observer newspaper, 29 August 2015)